Getting Started with PySpark

PySpark is an API interface that allows you to write Python code to interact with Apache Spark, which is an open source distributed computing framework to handle big data. As the size of data grows year over year, Spark has become a popular framework in the industry to efficiently process large datasets for streaming, data engineering, real-time analytics, exploratory data analysis and machine learning.

The core value proposition behind PySpark is that:

The following diagram shows the main components of a Spark application: 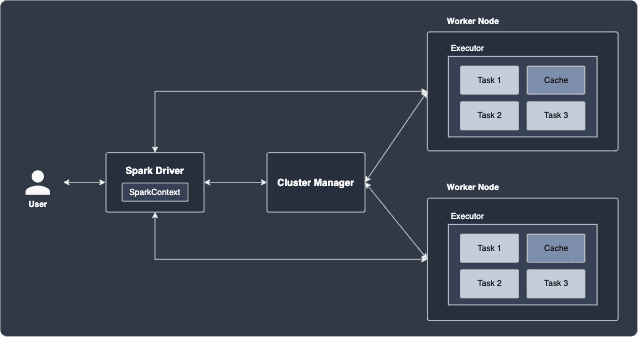 Briefly, the roles of each component are as follows:

Executors are threads or processes in the worker nodes that perform individual tasks. You can think of nodes as another word for machines. In the above diagram, there are 3 tasks (to be defined later) assigned to each executor, and the worker node spawns a single executor that handles these tasks one after another. As we shall see later, a single executor can be allocated with multiple CPUs, which allows the executor to handle tasks in parallel.

Worker nodes are machines that host the executors. A worker node can host multiple executors if CPU and memory are available.

Spark Driver is the entry point of the Spark application that receives the user's Spark program, and is responsible for the following:

All these components are written in a programming language called Scala, but they are compiled into Java byte-code so that they run in a Java Virtual Machines (JVM), which is a cross-platform runtime engine.

The basic building block of Spark is the Resilient Distributed Dataset (RDD), which is an immutable data structure that is logically partitioned across multiple nodes in the cluster for parallel computing. The following diagram illustrates an example of a RDD:

Here, our dataset is represented by a single RDD that consists of 4 partitions that is hosted by 3 separate worker nodes. Note that worker nodes may hold different number of partitions.

There are two types of operations we can perform on RDDs:

A transformation takes in as input one or more RDDs, and returns a new RDD by applying some function to the data. Examples include map(~), filter(~), sortByKey(~). Transformations can be applied one after another as shown below: 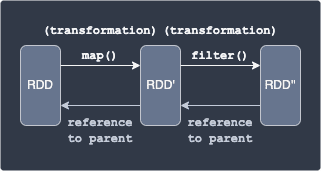 Here, we are applying the map(~) transformation which applies a function over each data to yield a new RDD, and then we perform the filter(~) transformation to obtain a subset of the data. RDDs are immutable, meaning RDD cannot be modified once created. When you perform a transformation on a RDD, a new RDD is returned while the original is kept intact.

Each newly created RDD holds a reference to the original RDD prior to the transformation. This allows Spark to keep track of the sequence of transformations, which is referred to as RDD lineage.

An action triggers a computation, and returns a value back to the Driver program, or writes to a stable external storage system:

This should make sense because the data held by the RDD even after applying some transformation is still partitioned into multiple nodes, and so we would need to aggregate the outputs into a single place - the driver node in this case.

Examples of actions include show(), reduce() and collect().

Since all the data from each node is sent over to the driver with an action, make sure that the driver node has enough RAM to hold all the incoming data - otherwise, an out-of-memory error will occur.

When you invoke an action (e.g. count(), take(), collect()) on an RDD, a job is created. Spark will then internally decompose a job into a single or multiple stages. Next, Spark splits each stage into tasks, which are units of work that the Spark driver’s scheduler ships to executors on the worker nodes to handle. Each task processes one unit of partitioned dataset in its memory.

Executors with one core

As an example, consider the following setup:

Multiple tasks can run in parallel on the same executor if you allocate more than one core to each executor. Consider the following case:

Here, each of our executors is equipped with 10 cores, but only 2 partitions reside at each node. This means that each executor can tackle the two tasks assigned to it in parallel using just 2 cores - the other 8 cores remain unused here. In other words, we are not making use of the available cores here since the number of partitions is too small, that is, we are underutilising our resources. A better configuration would be to have 10 partitions on each worker node so that each executor can parse all 10 partitions on their node in parallel.

Here, we have 6 partitions residing in each worker node, which is equipped with only one CPU core. The driver would need to create and schedule the same number of tasks as there are partitions (16 in this case). There is considerable overhead in having to manage and coordinate many small tasks. Therefore, having a large number of partitions is also not desirable.

The official PySpark documentationopen_in_new recommends that there should be 2 to 4 partitions for each core in the executor. An example of this is as follows:

Here, we have 2 partitions per worker node, which holds an executor with one CPU core. Note that the recommended offered by the official documentation is only a rule of thumb - you might want to experiment with different number of partitions. For instance, you might find that assigning two cores for each executor here would boost performance since the 2 partitions can be handled in parallel by the executors.

This introductory guide only covered the basics of PySpark. For your next step, we recommend that you follow our Getting Started with PySpark on Databricks guide to get some hands-on experience with PySpark programming on Databricks for free. After that, you can read our Comprehensive guide to RDDs to learn much more about RDDs!