What is gradient descent? 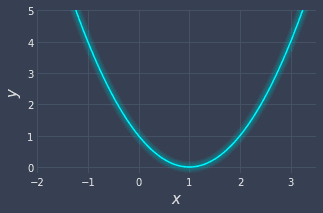 Our goal is to determine the value of $x$ that minimizes this function using gradient descent. Visually, we can see that the minimum occurs at $x=1$. This visual approach only works when the function is simple. More often than not, the functions you want to minimize are far more complex with large number of inputs.

The gradient descent algorithm begins by selecting a point of departure - say at $x=3$: 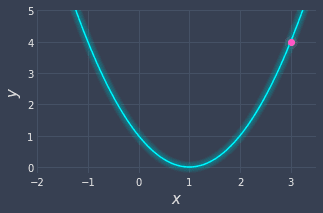 Clearly, $x=3$ is not the optimal value that minimizes the function. The question that the gradient descent algorithm repetitively asks is simple - which direction do I head towards to minimize the function. In other words, should I go rightwards and select values like $x=4$, or should I go leftwards and select values like $x=2$? Visually once again, we can see that $ x=2$ does a far better job in minimizing our function than $x=4$, so then we should take a step to the left as it would take us closer to the minimum of the function. 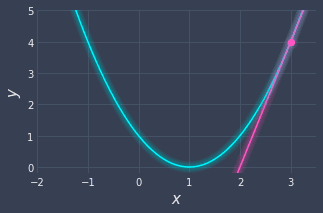 Since the slope is positive, we need to head to the left in order to minimize our function $f(x)$.

Note that if we had started at $x=-1$, the slope would be negative: 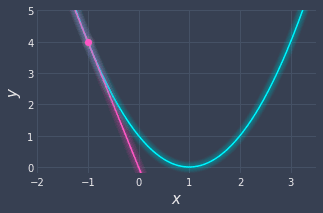 Since the slope is negative, we would have to head rightwards in this case to minimize $f(x)$.

Using basic calculus, we know that the gradient of $f(x)$ is as follows:

Gradient descent involves taking a step to the left if the gradient is positive, while taking a step to the right if the gradient is negative. Mathematically, a step would take us from the current value of $x$ to a new value of $x^*$, which is supposedly better because the function value may be smaller, that is, $f(x^*)\lt{f(x)}$. A simple version of gradient descent iteratively applies the following update formula to compute a new value of $x$:

Let's plot our new position $(-1,4)$ to see whether there was any improvement: 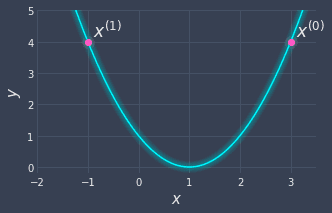 Unfortunately, our new value of $x$ did not decrease our function value. We did move leftwards, which is the correct direction, but the problem is that the step we took was too big. We overstepped and missed the minimum entirely!

In order to adjust the step size, gradient descent uses a parameter known as the learning rate $\alpha$:

The learning rate $\alpha$ is a numerical value (e.g. $0.01$) that tells us how big of a step we should take at each iteration of the gradient descent. There is a tradeoff when selecting $\alpha$. A small value of $\alpha$ means that we are taking a small step. While this does prevent overshooting like in the case we just encountered, this would involve more iterations to get to the minimum.

On the other hand, a large value for $\alpha$ involves taking large steps to get to the minimum faster, but there is a high risk of overshooting - our step might be so large that we might miss the minimum and end up at a value of $x$ that may even be further away from the optimal point than we started!

As an example, let's set a learning rate of $\alpha=0.1$ to perform an update: 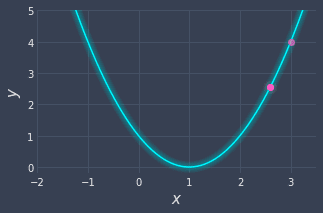 We can see that the point is closer to the minimum! Now, we just need to iteratively repeat this process:

Visually, the updated data point looks like the following: 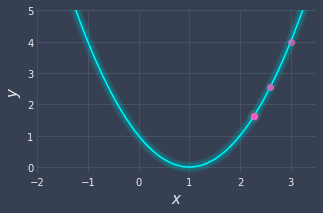 Great, our point is getting closer and closer to the minimum!

We just need to repetitively apply equation \eqref{eq:UhevCzeNbdSxRO09OXD} until one of the following terminating conditions is met:

Here, we will run gradient descent for a total of 100 iterations. The result is as follows: 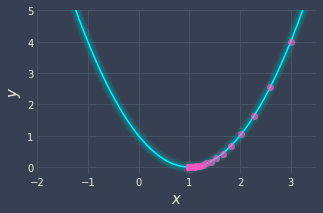 The other way of visualizing how the function value changes over the iterations is to simply plot them: 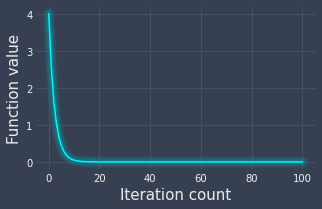 We can see that we nearly reach the minimum value at the 10th iteration!

There is no one ideal value for $\alpha$ - while a specific alpha might work well for one situation, it may perform terribly for some other situation. For instance, if we set $\alpha=1$, then we end up in an infinite loop of going back and forth between $x=3$ and $x=-1$:

Therefore, it is important to test out different values of $\alpha$. Many machine learning libraries use a default learning rate of either $\alpha=0.01$ or $\alpha=0.001$.

The gradient value becomes smaller as we approach the local minimum since the slope $f'(x)$ becomes flatter and approaches $0$. This means that we will take increasingly smaller steps as we iterate.

Suppose we wanted to minimize the following two-dimensional function: 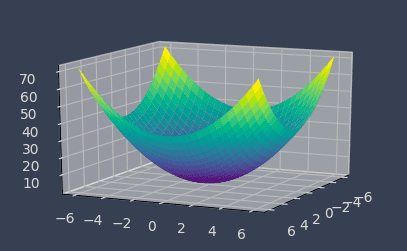 Visually, we can see that the minimum occurs at the origin $(0,0)$.

The principle equations for gradient descent would be as follows:

Here, since we are dealing with multiple variables, we must switch to partial derivatives.

Next, let's compute partial derivative with respect to $x_1$:

Therefore, we can update equations \eqref{eq:bCLwwPiCj5oNFjNht6T} as:

Now that we have our principle equations, we must select a:

Plugging our starting point and learning rate into \eqref{eq:fiGz17bpovyE0DUfacO} yields: 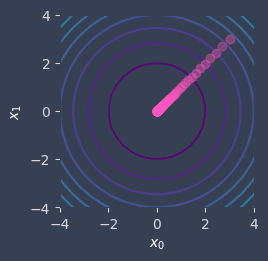 Here, the purplish contours in the middle represent lower values while the light-bluish outer contours represent higher values. As we can see, our point has gradually has moved towards the lowest point!

The final output of the gradient descent algorithm is the values of $x_0$ and $x_1$ that minimizes our function $f$:

Here $\nabla$ is the multi-variate version of the gradient. The expanded form of \eqref{eq:mx0qJM7MMnbfHOzPLup} is as follows:

The logic behind gradient descent remains the same - we must compute the gradient $\nabla{f(\boldsymbol{x})}$, which holds the partial derivatives of $f$ with respect to each variable $x_0$, $x_1$ and $x_{n-1}$:

Why gradient descent instead of gradient ascent?

This optimization problem can be reformulated as maximizing the following function:

Getting stuck in a local minimum

A major limitation of gradient descent is that we can converge to a local minimum instead of a global minimum. For instance, consider the following function: 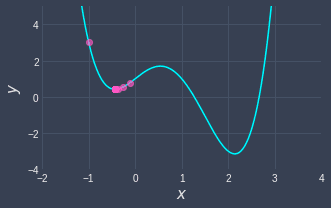 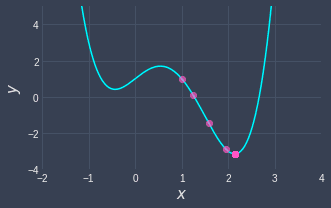 The way to avoid getting stuck at a local minimum is to either:

In some cases, the gradient descent will not converge. We have already come across this previously - this can happen when we go back and forth infinitely between two points:

Again, the way to overcome this limitation is to:

The gradient descent implementation is surprisingly simple. Let's start with the one-dimensional case. Just as we did in our example above, suppose we wanted to perform gradient descent on the following function:

We first begin by defining the function itself as well as its derivative:

We can plot the function value against the iteration count by using the returned $x$-values of each iteration: 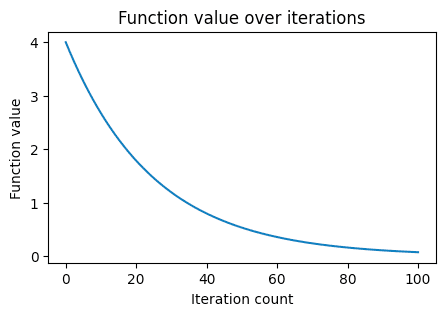 In the previous implementation of gradient descent, we have explicitly defined the derivative function:

What we can do instead is to numerically compute the approximate gradient like so: 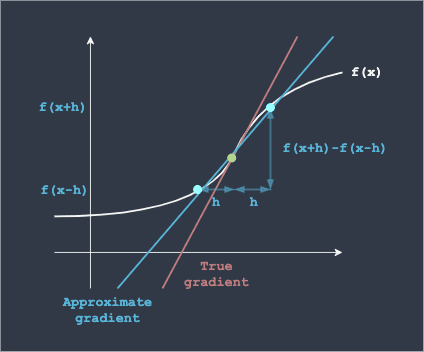 Here, $h$ is a small step taken to the left and right of the point to generate two points (colored blue in the diagram above) by which to compute the gradient. The calculation of the gradient is based on the classic approach of dividing the rise by the run.

The implementation of numerical differentiation in Python is dead simple:

In theory, if we take $h$ to be infinitely small, the approximation of the gradient becomes exact. However, if we set the h to be too low in our code (e.g. h=1e-100), h will be rounded off to zero and throw a DivisionByZero error. This rounding-off happens because numerical types like float and double can only store a limited number of digits accurately.

Now, we can rewrite our gradient_descent(~) function to compute the gradient using numerical differentiation instead:

We can now conveniently just supply the function and the starting point:

Great, we see that the final value of $x$ is the same as before when we computed the gradient in exact form.

First and foremost, our target function will take as input a list of values instead of a single scalar:

Now, recall that the numerical differentiation for the one-dimensional case was as follows:

Next, we modify our implementation of numerical differentiation like so:

Here, we are first creating a NumPy array grad that will hold our computed gradients using zeros_like(~). Since we are dealing with two-dimensional data, grad will be of length two and will initially be filled with zeros. We then iterate through each dimension using a simple for-loop. The core idea here is that we must make changes ($\pm{h}$) to one dimension at a time, and leave all the other dimensions intact. This involves setting the original value back for the current dimension at the end of each iteration.

We can use our new numerical_diff(~) function like so:

Mathematically, we are computing the following:

From the outlook, nothing is different from the previous implementation of gradient_descent(~). However, the grad value returned by numerical_diff(~) was previously a numerical value, whereas now, grad value is a NumPy array holding the partial derivatives for each dimension.

The optimal value of $\boldsymbol{x}$ is approximately at the origin - we know this to be correct from our examplelink.

Gradient descent is an iterative algorithm that optimizes a given function. This technique plays an instrumental role in machine learning because many models define a cost function that we typically optimize via gradient descent.